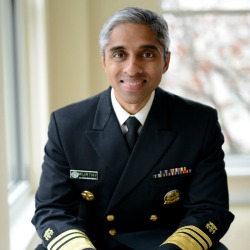 No reason to have lunch alone! The Harvard Club of Dallas welcomes Dr. Vivek Murthy – author, physician, and former Surgeon General of the United States – for a virtual discussion of his book "Together: The Healing Power of Human Connection in a Sometimes Lonely World.”  He will be joined in conversation by his college classmate, Sewell Chan, who is Editorial Page Editor of the Los Angeles Times. In his groundbreaking book, Dr. Murthy makes a case for loneliness as a public health concern: a root cause and contributor to many of the epidemics sweeping the world from alcohol and drug addiction to violence to depression and anxiety.  Loneliness, he argues, is affecting not only our health, but also how our children experience school, how we perform in the workplace, and the sense of division and polarization in our society.  Dr. Murthy received his B.A. in Biochemical Sciences from Harvard and his M.D. and M.B.A. degrees from Yale. Dr. Murthy served as the 19th Surgeon General of the United States appointed by President Barack Obama.  As the Vice-Admiral of the US Public Health Service Commissioned Corps, he commanded a uniformed service of 6,600 public health officers globally. Dr. Murthy resides in Washington, D.C. with his wife Dr. Alice Chen, and their two young children. Sewell Chan received his B.A. in Social Studies from Harvard and a master’s degree in politics from Oxford, where he studied on a British Marshall Scholarship.  As Editorial Page Editor of the Los Angeles Times, he oversees the editorial board and the Op-Ed and Sunday Opinion pages of The Times.  Before joining The Times in 2018, he worked for 14 years at the New York Times.  He began his career in 2000 as a reporter at the Washington Post. The discussion is hosted by Theresa Chung. Theresa Chung is a member of the Board of the Harvard Club of Dallas and is a fellow graduate with Vivek and Sewell from Harvard.

Time: 1:00 PM (CST) Location: Virtual (Link will be sent prior to the event) Cost: Free and open to all! Please register here: http://hcdallas.clubs.harvard.edu/article.html?aid=623